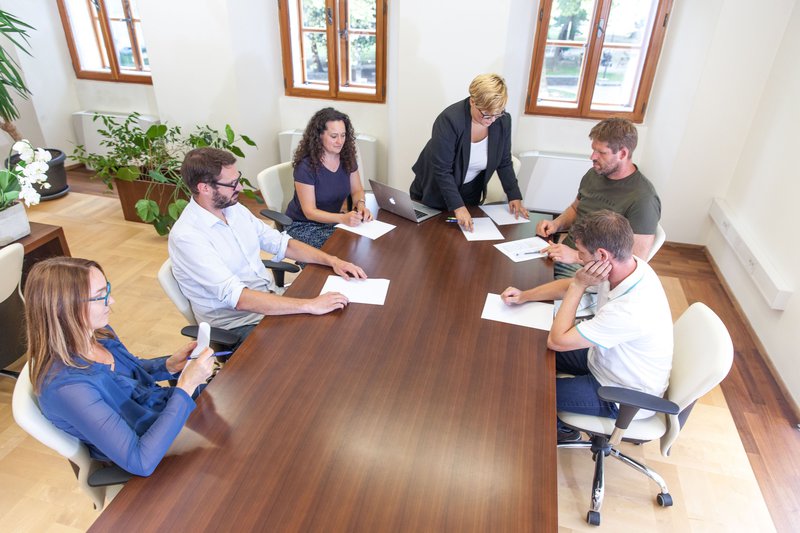 About the WRC group members

Biography: Dr Melita Sternad Lemut got her B.Sc. in Food Technology (Enology) at the Biotechnical Faculty of Ljubljana in 1992. After graduating she was practically trained in the wine estates (USA, Switzerland) and has worked in industrial research (R&D; Nestle, Switzerland) abroad. Returning home she and her ex-husband created their own wine estate with brand name Tilia. In 2006 she joint the University of Nova Gorica as a Lecturer at the School of Viticulture & Enology and has enroled her PhD studies at the Postgraduate Study Programme of Environmental Sciences at the same University in 2009 and finished in 2014. She is one of the initiators of the Wine Research Centre establishment at University of Nova Gorica.

Role: Melita is involved in research and teaching and was working as a Programme director of Bachelor’s programme in Viticulture and Enology from 2009 -2011. In 2014 she was appointed as a Head of Wine Research Centre.

Biography: Dr Maja Ravnikar finished her BSc in 1984 at the Department of Biology, Biotechnical Faculty, University of Ljubljana, where she also obtained her master (1988) and PhD degree (1991). She was elected to the position of full professor for the field of Biotechnology by the University of Nova Gorica.

Role: Maja is employed at the National Institute of Biology where she is the head of Department of Biotechnology and Systems Biology since 2001 and scientific leader of the Instrumental Centre Planta since 1994. From 1999 she is leading the research programme “Biotechnology and Plant Systems Biology”. The programme was evaluated by the Slovenian Research Agency and considered as one of the top 19 research programmes in 2004 and got the longest prolongation period in 2009. She also leads authorized diagnostic laboratory for determination of micro-organisms for the Phytosanitary Administration (MAFF), phytosanitary inspection and is closely involved with the business companies. From 2009 she is also the member of Wine Research Centre.

Biography: Dr Branka Mozetič Vodopivec got her BSc degree at Food Science Department, Biotechnical Faculty, University of Ljubljana in 1998. From 1998-2000 she has worked in Fruit Processing Industry Fructal d.d. (Ajdovščina, Slovenia). In 2000 she became a PhD student and young researcher at University of Nova Gorica (Laboratory for Environmental Research). In 2004 she obtained her PhD degree in Food Sciences at Biotechnical Faculty, University of Ljubljana (Slovenia) and has joined Laboratory for Environmental Research at the University of Nova Gorica as postdoctoral associate till 2008, when she became a member of Wine Research Centre. Between 2004 and 2012 she often visited Department for Chemistry and Biology at Roskilde University Center (Denmark) and in 2010 she spent half a year in Norway, at Bioforsk Vest Ullensvang as postdoctoral associate.

Role: Branka is a member of Wine Research Centre and an associate professor in the field of Food Technology. From September 2011 she has been appointed as a Dean of School for Viticulture and Enology at University of Nova Gorica.

Biography: Dr Lorena Butinar commenced her research work in the field of fungal microbiology (B.Sc. in Biology) and continued with wine microbiology with focus on yeast biology. Lorena obtained a PhD (2007) in Microbiology from the Faculty of Medicine, University of Ljubljana (SI). Her PhD research was performed at National Institute of Chemistry in Ljubljana. She was studying the fungal ecology of extremely saline and cold environments. During her Ph.D. she gained knowledge of fungal taxonomy and systematics, especially of yeasts and genera Aspergillus and Penicillium with associated teleomorphs. Currently, she is studying microbial ecology of grape of 'Rebula’ cultivar (Vitis vinifera L. cv. 'Rebula’) and spontaneous wine fermentations during maceration of the forementioned grape. She is also studying yeasts and yeast-like fungi with biocontrol potential against Botrytis cinerea.

Role: Lorena first joined the group at the Laboratory for Environmental Research of the University of Nova Gorica as a postdoctoral associate. Currently she is a assistant professor for the scientific field of Microbiology at the School of Environmental Sciences and the School for Viticulture and Enology. After establishment of Wine Research Centre in 2008 she become its member and until 2014 she was also a Head of this research group.

Biography: Dr Guillaume Antalick received his education in France (University of Bordeaux and University of Orléans) where he graduated with a BSc and a Masters’ in Analytical/Organic Chemistry. He began his PhD in 2007 at the Faculty of Oenology/Institute of Vine and Wine Sciences (University of Bordeaux, France) investigating the impact of malolactic fermentation on fruity aroma of red wines. His research combined the development of analytical methods for the quantification of wine odorant compounds (HS/SPME, SBSE-GC/MS), the study of wine microorganisms’ metabolism (LAB, yeast), and sensory analysis. After completing his PhD in 2010, Guillaume spent 1.5 years at the Institute for Wine Biotechnology/University of Stellenbosch (South Africa) as a postdoctoral fellow where he studied the impact of vineyard treatments on yeast-derived compounds. During a second postdoc from August 2013 at the National Wine and Grape Industry Centre/Charles Sturt University (Wagga Wagga, Australia), his research focused on grape aromatic maturity in relation to wine style, typicality and regionality. At UNG, he is working on the projects linked to the following topics: white wine aromatic quality in relation with the presence of metal ion, grapevine response to water stress under different climate, terroir and typicality of Balkan wines and Norwegian ciders.

Role: Guillaume joined the team as a researcher and Assistant Professor in the field of Enology in November 2016. He participates in research projects, implements internationals partnerships and teaches at the School of Viticulture and Enology. He is currently involved in three projects (national and international) as the project leader and scientific coordinator.

Biography: Dr. Jan Reščič completed the study of agronomy at the first and study of horticulture at the second Bologna level at the Biotechnical Faculty in Ljubljana. At the same faculty, he completed his PhD and was employed as a young researcher until 2017. Within his PhD study, he investigated and studied the effects of ampelotechnic measures on the quality of grape and wine of certain grapevine varieties, with emphasis on phenolic compounds. Between February and June 2018, Jan joined the School of Viticulture and Enology within an on-the-job-training, where he prepared study materials in soil chemistry and biology, and viticulture. Since September 2018 he is a member of the Wine Research Center at the University of Nova Gorica and an Assistant at the School of Viticulture and Enology.

Role: Jan joined the Wine Research Center as a postdoctoral researcher, in which he participates in research projects and in laboratory and field exercises with the students.

Biography: Dr. Erika Jež completed her university studies at the faculty in Environmental Sciences Nova Gorica. She started working as a young researcher at the Center for Pedology and Environmental Protection (CPVO ) at the Biotechnical Faculty in Ljubljana, where she obtained her PhD in 2019. In the context of her doctoral thesis she has been engaged in research and investigation of potentially toxic metals in soil. CPVO researchers patented the technology for removing heavy metals from contaminated soils and the main task of the Erika was to determine the negative effects of the remediated soils after their introduction into the environment.

Role: Erika has been employed as an assistant with PhD at the University of Nova Gorica since 2019 and practices with students in both the environmental and viticultural fields. She is involved in research projects within the Wine Research Center.

Biography: Mag Marko Lesica graduated in 2005 at the University of Ljubljana, Department of Food Science, and then continued masters studies at the same Faculty. During his studies he gained practical work experience in the wine cellar Goriska Brda, where he also carried out a survey for the masters studies. In 2007, he employed for a short period at the company MIP d.d. as head of the department, and in 2008 he got a regular job in the Wine Cellar Goriška Brda z.o.o. and worked there until 2010. During this period he also completed postgraduate studies in 2009. In 2011-2014 he continued to work at the company AEB d.o.o. Sežana, as a commercial-technologist in charge of the sale of oenological means, equipment for the beverage industry and cleaning agents for the food industry in Slovenia and former Yugoslavia. Since September 2015, Marko is a member of the Wine Research Centre at the University of Nova Gorica.

Role: Marko is a member of Wine Research Centre and an assistant with a Master’s degree at the School for Viticulture and Enology. He participates in research projects, assists in the organisation of work at University Wine Estate and in the practical training of students.