According to the international RUR ranking (Round University Ranking), which evaluates and ranks the world's best universities, the University of Nova Gorica is once again ranked an outstanding 228th in 2022.

It has also achieved very good rankings in previous years, with its best achievement in 2019, with the 140th place. The top spots in this ranking are dominated by the best-known American (e.g. California Institute of Technology, Stanford University, Harvard University, etc.) and English universities (e.g. University of Oxford, University of Cambridge, etc.).

Each year, the RUR rankings assess the world's top universities, ranking them according to their overall performance, and separately by four areas: teaching, research, internationalisation and financial sustainability. A closer look at the results shows that UNG ranks better than 255th in three of the four assessment areas, and only in the area of financial sustainability is it ranked 346th. The latter element is, of course, the one on which the institution has the least influence of all, or is most dependent on societal support for higher education and science. The gap is illustrated even more clearly in the figure below, which shows UNG's overall ranking from 2017 onwards (in red), and specifically its ranking in terms of financial sustainability alone (in blue). 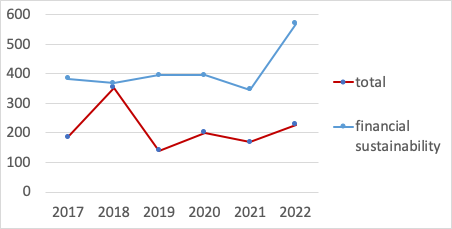 There are different rankings of the world's universities, differentiated by the details of the methodology used. For this reason, the rankings of individual Slovenian universities (at least those that are included in the rankings) also vary between the different rankings. Interestingly, the University of Ljubljana, reviewing the results of the second evaluation, comes to similar conclusions as above.

The RUR rankings are based on data on the world's universities collected by Clarivate Analytics as part of the global project Global Institutional Profiles Project.

Based on the data collected, an analysis is carried out in the framework of the RUR ranking, which takes into account 20 quality indicators from the four areas. In addition, the research (40%) and teaching (40%) indicators contribute the most to the overall score. The methodology is described on the website. All indicators take into account the size of the institution, so that small and large universities can be compared on an equal footing in terms of the quality of their work.

Such university evaluations are important for prospective students deciding which university to study at, as the quality of studies and the choice of study programmes that ensure high employability are key for them. They are also important for employers, who can find out which universities can provide the best-educated young professionals.

The University of Nova Gorica will continue to strive for the basic guideline of our activities, increasing the quality of educational and scientific research activities. In cooperation with the line ministry, we will try to find ways to improve our rankings, including in terms of financial sustainability. We are confident that our efforts will be reflected in the rankings of world universities.